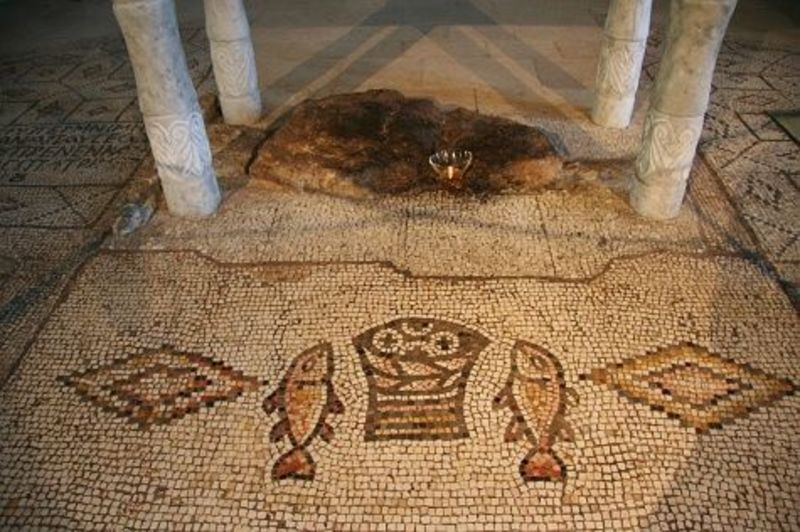 1Jesus went to the other side of the Sea of Galilee, also called the Sea of Tiberias. 2A large crowd kept following him, because they saw the signs that he was doing for the sick. 3Jesus went up the mountain and sat down there with his disciples. 4Now the Passover, the festival of the Jewish people, was near. 5When he looked up and saw a large crowd coming toward him, Jesus said to Philip, “Where are we to buy bread for these people to eat?” 6Jesus said this to test Philip, for he himself knew what he was going to do. 7Philip answered him, “Six months’ wages would not buy enough bread for each of them to get a little.” 8One of his disciples, Andrew, Simon Peter’s brother, said to him, 9“There is a boy here who has five barley loaves and two fish. But what are they among so many people?” 10Jesus said, “Make the people sit down.” Now there was a great deal of grass in the place; so they sat down, about five thousand in all. 11Then Jesus took the loaves, and when he had given thanks, he distributed them to those who were seated; so also the fish, as much as they wanted. 12When they were satisfied, he told his disciples, “Gather up the fragments left over, so that nothing may be lost.” 13So they gathered them up, and from the fragments of the five barley loaves, left by those who had eaten, they filled twelve baskets. 14When the people saw the sign that he had done, they began to say, “This is indeed the prophet who is to come into the world.”
15When Jesus realized that they were about to come and take him by force to make him king, he withdrew again to the mountain by himself.
16When evening came, his disciples went down to the sea, 17got into a boat, and started across the sea to Capernaum. It was now dark, and Jesus had not yet come to them. 18The sea became rough because a strong wind was blowing. 19When they had rowed about three or four miles, they saw Jesus walking on the sea and coming near the boat, and they were terrified. 20But Jesus said to them, “It is I; do not be afraid.” 21Then they wanted to take him into the boat, and immediately the boat reached the land toward which they were going.